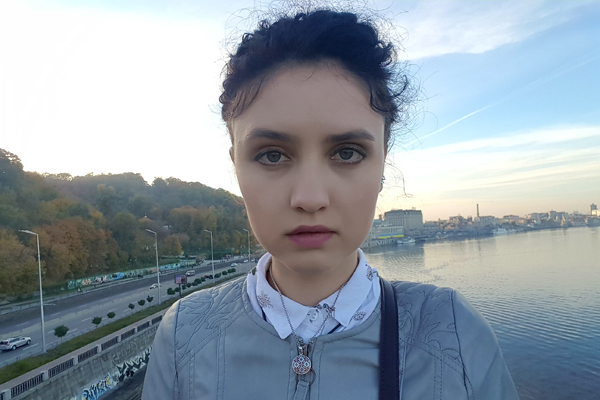 Shynkarenko Viktoriya Sergiivna, currently the student of the sixth course (II year of the Master course) of the composer department of the National Musical Academy of Ukraine named after P.I.Tchaikovsky in the class of Professor Dychko Lesya Vasylivna.

Participated on multiple occasions in the class concerts, concerts of young composers of the National Musical Academy of Ukraine named after P.I.Tchaikovsky, “Music of young composers”, music of graduate composers, was invited as the guest composer to Klaipeds universitetas Menu fakultetas for the Music Day on September 1, 2014 in Klaidepa (Lithuania) with the performance of the prelude “Morning” for piano; Laureate of the Second Prize of the Eighth International Contest of young composers named after Ivan Karabyts in 2018; Laureate of the Third, Second and First Prizes of the vocal contest “Silver Source” in Kryviy Rig and the First Prize of the vocal contest “Star Bridges” in Kyiv in the nomination of variety vocal. Participated in the “Presentation of artistic and studying projects of the studio of electro-acoustic music of the National Musical Academy of Ukraine” in the framework of the XIV International scientific and practical conference “Actual problems of music studying in youth studies” in Kyiv in 2018. The project was headed by the composer Alla Zagaykevych.

Planning to continue studying at the composer department as the assistant trainee and to become member of the Union of Composers of Ukraine.

Prelude “Morning” for piano, “Small variations” and two cycles of variations for the themes of Ukrainian folk songs for piano; “Split” – four miniatures for violin and piano; romances for mezzo-soprano vocal and piano “About winter” to the text of Ukrainian poets; Sonata for piano; Sonata for piano and vibraphone; Sonata for flute and percussions (piano, small drum, campanelli); music for mixed chorus – “Prayer”, “Peaceful Ectenia” to the canonic spiritual texts; Symphony “Opposition” for symphonic orchestra; “Palimpsest” for symphonic orchestra; Ballet “VIP masquerade ball” in ten scenes; performance “Two moods of Joker”; songs for vocal, saxophone and piano “The Sun”, “Hug Me” (written for the short film of the same title); “LUCE” – songs for vocal, piano, saxophone, organ and bass guitar; electro-acoustic compositions “Portraits” (“Tuner near a fireplace”. “Bariska ”, “Venichka”, “Mukha”); music for the short film “Hug Me”; numerous chamber-instrumental and vocal compositions for the folk instrument kobza.