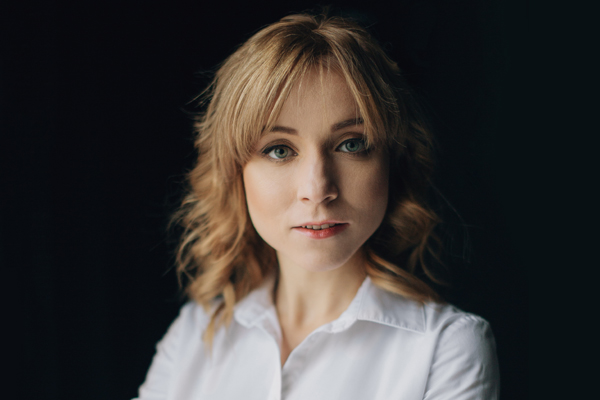 2) The National Musical Academy of Ukraine, assistant training and post graduate course (2009-2016). Defended the dissertation and received the scientific degree of the Candidate of sciences in the sphere of art studies (2016).

Since 2011 – member of the National Union of Composers of Ukraine. In 2017 was awarded by the Grant of the President of Ukraine for the artistic youth. Laureate of All-Ukrainian composer contests. The music publishing house “Melosvit” published 5 sets of scores, compositions from which became part of repertoire of artistic groups in various cities of Ukraine.
Collaborated with the choreographers V.Pysarev, V.Vitkovskiy (Opera Studio of the National Musical Academy of Ukraine), O.Nesterov (Academy of Dance named after S.Lyfar), O.Yatsenko (Folk Dance Ensemble “Ukraine”); with the director O.Taranenko (currently, the Chief Director of Kyiv Opera and Ballet Theatre for Children and Youth); with the conductors A.Kulbaba, V.Oliynyk, (the National Opera), R.Budzyak (currently, the Conductor of the Symphonic pop orchestra), Yu.Tkach (Chorus of the Ukrainian Radio) and others.

Worked as the lecturer, in particular, in the Institute of Arts of the National Pedagogic University named after Dragomanov, as the head of the department of records and concert activities of the Union of Artistic Groups “Music” of the Ukrainian radio.
Currently, Anastasiya Komlikova is the Chief Choirmaster of the Ukrainian Academic Folk and Ethnographic Ensemble “Kalyna”.